Peter Max was born in Berlin in 1937, but his family moved to China when he was still very young.  The young Peter Max would move frequently with his family, learning about a variety of cultures throughout the world while traveling from Tibet to Africa to Israel to Europe until his family moved to the U.S.  In American, Peter Max was trained at the Art Students League, Pratt Institute, and the School of Visual Arts, all in New York.
Peter Max and his vibrant colors have become part of the fabric of contemporary American culture.  In the 1960's Peter Max rose to youthful prominence with his now-famous Cosmic '60s style, a bold linear type of painting which employed Fauvist use of color and depicted transcendental themes.  Peter Max revolutionized the art of the 60’s just as the Beatles transformed the music of the decade.  As his expressionistic style evolved, becoming more sensuous and painterly, Max’s unique symbolism and vibrant color palette have continued to inspire new generations of Americans throughout the decades.  Peter Max is a passionate environmentalist and defender of human and animal rights, often dedicating paintings for these noteworthy causes.
Peter Max has celebrated our nation's principles of freedom and democracy with his famous paintings of American icons of freedom including Lady Liberty and the American Flag.
Peter Max has painted for six U.S. Presidents and his art is on display in Presidential Libraries and in U.S. Embassies. Peter Max has painted our Lady Liberty annually since America's Bicentennial. Peter Max was official artist of the 2006 U.S. Olympic Team. Peter Max has also been Official Artist of 5 Super Bowls, World Cup USA, The World Series, The U.S. Open, The Indy 500, The NYC Marathon and The Kentucky Derby. 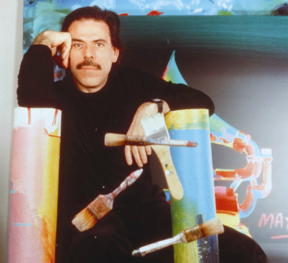