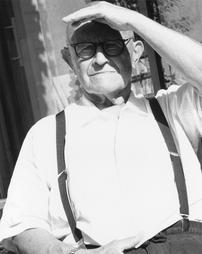 Jim Dine (born June 16, 1935 in Cincinnati, Ohio) is an American artist whose œuvre extends over sixty years. Dine’s work includes painting, drawing, printmaking (in many forms including lithographs, etchings, gravure, intaglio, woodcuts, letterpress and linocuts), sculpture and photography; his early works encompassed assemblage and happenings, while in recent years his poetry output, both in publications and readings, has increased.

Dine has been associated with numerous art movements throughout his career including Neo-Dada (use of collage and found objects), Abstract Expressionism (the gestural nature of his painting), and Pop Art (affixing everyday objects including tools, rope, articles of clothing and even a bathroom sink) to his canvases, yet he has actively avoided such classifications. At the core of his art, regardless of the medium of the specific work, lies an intense process of autobiographical reflection, a relentless exploration and criticism of the self through a number of highly personal motifs which include: the heart, the bathrobe, tools, antique sculpture, and the character of Pinocchio (among flora, skulls, birds and figurative self-portraits). Dine’s approach is all-encompassing, incorporating his entire lived experience: "Dine’s art has a stream of consciousness quality to its evolution, and is based on all aspects of his life—what he is reading, objects he comes upon in souvenir shops around the world, a serious study of art from every time and place that he understands as being useful to his own practice."

Dine’s distinctions include his nomination as a member of the Academy of Arts and Letters in New York (1980), Commandeur de l’Ordre des Arts et des Lettres (2003), the British Museum Medal (2015) following his donation of 234 prints to the museum in 2014, membership of the Accademia di San Luca in Rome (2017), and Chevalier de l'Ordre de la Légion d'Honneur (2018).