Charles Fazzino is a trained primitive artist known for cheerful, three-dimensional artwork of urban life.  The work of Charles Fazzino screams with color, activity and vivaciousness that only he can bring to life on paper.
Charles Fazzino, graduate of the School of Visual Arts in New York City is one of the most popular and highly-collected pop artists of all time.
During his more-than-thirty years as a pop artist, Charles Fazzino has inserted his unique, detailed, vibrant, and three-dimensional style of artwork into the very fabric of popular culture.
The artworks of Charles Fazzino are exhibited in hundreds of museums and galleries world-wide. Charles Fazzino has been selected as the official artist for festivals and events all over the world.
One of the most extensive Charles Fazzino installations was commissioned by American Airlines. The latest installation is a Charles Fazzino sculpture in Terminal 8 at JFK International Airport. The Charles Fazzino collection,  started with an original, 3-paneled, 16-foot mural with hanging mobile, the artist completed the work titled “American Airlines: A Legacy of Service to New York” in 2008, and the collection has been growing ever since. Charles Fazzino is often referred to as a pop culture historian because of the breadth of his work and the way it touches his collectors and captures the best parts of their contemporary lives. The legacy of Charles Fazzino will mark him as part of the next generation of famous pop artists as he follows the paths originally forged by pop art pioneers such as Andy Warhol, Keith Haring, Red Grooms, and Roy Lichtenstein. 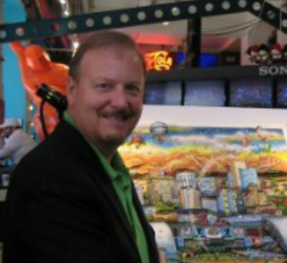