“Existential Balance” is the term, coined by Tuan, to bring emphasis to the importance of balance to human existence, because life itself is about balance. Each of Tuan’s sculptures is, therefore, a visual and tactile essay on “Existential Balance”, featuring the counterpoint and interaction of elements that highlight the balance between darkness and light, masculine and feminine, rough and smooth, and often heaven and earth.
Another unique feature of the sculptures of Tuan is the way that he has masterfully engineered them to seem almost weightless, belying the fact that they are cast in bronze. The perceived weightiness of the dense bronze is mediated by way of Tuan’s architectural, mathematical, and engineering skills, creating elements that seem weightless; poetic and philosophical expressions of Tuan’s understanding of “Existential Balance.”
Born in Vietnam in 1963 to a family of wealth and privilege, Tuan learned volumes about balance after the fall of Saigon in 1975. Wealth had turned to poverty, privilege to oppression, and happiness to sadness; Tuan began to realize that one cannot exist without the other. Thirsting for freedom, Tuan’s first attempt to escape the Communist regime failed, he witnessed the death of his close friend, and was cast into a concentration camp. Tuan never gave up and was not broken, in fact, by utilizing his skills as a sculptor and clay from his cell floor, he was able to sculpt likenesses of his fellow inmates and his captors, expediting his release. Finally succeeding in fleeing Vietnam, Tuan eventually made it to the United States in 1989, where he embarked on a career as a sculptor with renewed energy and passion.
Tuan received his Fine Arts degree from the Art Institute of Southern California in Laguna Beach, California, and in 1994 he was awarded the prestigious Gloria Medal from the National Sculpture Society (New York), a medal bestowed upon a young artist for a meritorious body of work. Later, in 2006, Tuan received the coveted Gold Medal for Sculpture from the California Art Club for “Rendezvous”. Tuan’s work can be found on exhibit in fine art galleries throughout the world, and in such notable permanent collections as the Pasadena Museum of Art, the MOCA Museum and the White House in Washington, D.C.
His commissioned works and installations include: The Vietnam War Memorial in Westminster, California, commemorating the partnership between American and Vietnamese soldiers during the Vietnam War. The Kuhn Corporation’s Plaza in Orlando, Florida; where the complete series of Tuan’s heroics are featured. The Island of Trinidad, Heisler Park in Laguna Beach, California where Tuan’s heroic “Rendezvous” now overlooks the ocean, and in Mobile, Alabama where larger-than-life tribute to Saint Therese “the little flower” was dedicated in 2008. With the value of freedom constantly on his mind, Tuan’s latest project is the creation of a Vietnamese Refugee Memorial intended to instill an appreciation of freedom in the hearts of future generations. 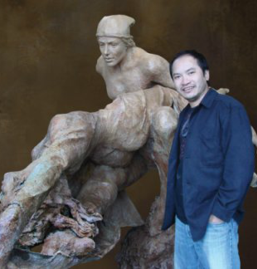