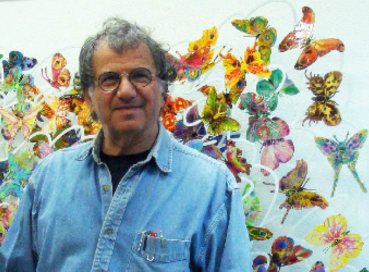 David Gerstein was born in Jerusalem and studied at the Bezalel Academy, Jerusalem; Ecole des Beaux Arts, Paris; Art Students' League, New York; and St. Martin's, London.   David Gerstein's art is made by placing several metal panels together with separators to create a three-dimensional feel.  David Gerstein has a style that is completely his own and is fun and energetic.
David Gerstein is an Israeli painter and sculptor. He began as a figurative painter and illustrator of children books and was recipient of the Israel Museum's Prize for Illustration. Gerstein's post-pop style is characterized by bold colored, multi-layered cutout metal. His outdoor sculpture "Momentum" is Singapore's tallest public sculpture . David Gerstein sculpts metal in three-dimensions in an original way, with a unique style. David Gerstein's hand-painted sculpture are rich in colors, depicting various emotions, or typical moments of the modern, urban life. Opposed to conventions and established rules, the sculpture of David Gerstein are in movement rather than inert, which confers them a contagious optimism, a
stimulating force. His most characteristic work are his wall sculpture. Through his exceptional style, David Gerstein presents an astonishing art and defines a unique
label by exploring the happenings of life.
Many international institutions, public and private, have acquired monumental David Gerstein sculpture displaying them in cultural urban spaces. David Gerstein
monumental works can be seen in Bangkok, Thailand; Tel Aviv, Israel; Rome,
Italy; and many other locations throughout the world. His works have been given
by Israel's Foreign Ministry to heads of state around the world. His work is also
shown in numerous museums & contemporary art galleries around the world.
David Gerstein shines by his innovative skills that remind us of our most intimate memories.