Robert Indiana, born Robert Clark, was born in 1928 in New Castle, Indiana and was adopted as an infant, moving around frequently with his family. His artistic talent was noticed from an early age, which encouraged him to pursue a career as an artist. After graduating from high school, he spent three years in the U.S. Air Force and then studied at the Art Institute of Chicago, the Skowhegan School of Sculpture and Painting in Maine, and the Edinburgh College of Art in Scotland. In 1956, two years after moving to New York, Indiana met Ellsworth Kelly, and upon his recommendation took up residence in Coenties Slip. There he joined a community of artists that would come to include Kelly, Agnes Martin, James Rosenquist and Jack Youngerman. The environment of the Slip had a profound impact on Indiana’s work as he utilized the ginkgo leaves in his early art and it was upon his completion of his 19-foot mural Stavrosis (1958), a crucifixion pieced together from forty-four sheets of paper that he found in his loft, that Indiana adopted the name of his native state as his own. Quickly gaining fame for his assemblages, Indiana was featured in influential New York shows at the Museum of Modern Art. Although acknowledged as a leader of Pop Art, Indiana distinguished himself from his Pop peers by addressing important social and political issues and incorporating profound historical and literary references into his works. In 1964 Indiana accepted Philip Johnson’s invitation to design a new work for the New York State Pavilion at the New York World’s Fair, creating a 20-foot EAT sign composed of flashing lights, and collaborated with Andy Warhol on the film Eat, a silent portrait of Indiana eating a mushroom in his Coenties Slip studio. 1966 marked a turning point in Indiana’s career with the success of his LOVE image, a now iconic symbol. Love is a subject of great spiritual significance for the artist, and also a theme central to Indiana’s work. 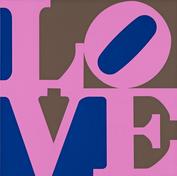 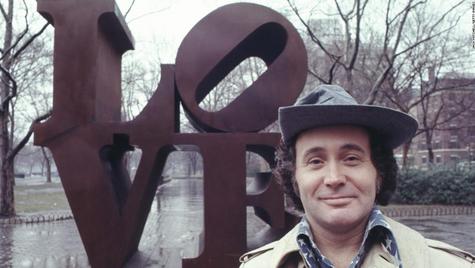 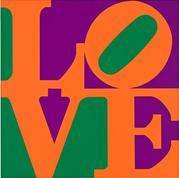 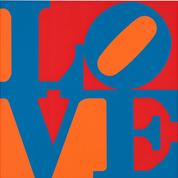 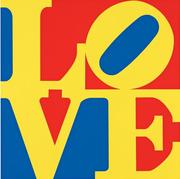 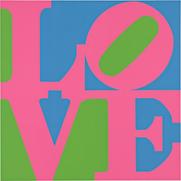