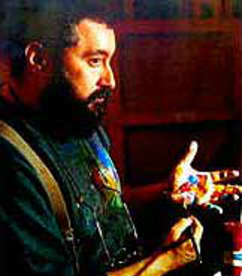 Michael Gorban had the honor of being the youngest artist to display his work at the distinguished Hermitage Museum.  Michael Gorban's paintings were hung adjacent to artists such as Kandinsky, Dali, Rubilov and Andre.  Michael Gorban's use of light and shadow in his still life paintings gives them a romantic and timeless quality.
The expanses of Michael Gorban’s descriptive imagings are boundless. Michael Gorban paintings sail between the artistic experience of the renaissance period and that of the 19th or 21st centuries. His superb representational talents, not limited to the space of actuality, and his imagination, charged by his personal experience and childhood memories of Russia, open before us a broad arc of images with individual, subjective meanings.
The works of Michael Gorban are constructed out of an artistic language well versed in academic painting’s secrets of precision and knowing how to make awe-inspiring use of them. Michael Gorban creates series of paintings featuring subjects such as musical instruments, model ships, window views, and children. One sees the children as if they were their own, and the violin as if he was the musician and the windows with an undeniable sense of the comfort and security of hearth and home.
"Painting is a sensual experience, I will not sign my name until I am completely satisfied.... I have never painted under duress or according to order. My success comes from people feeling the same satisfaction that I myself felt upon completing the painting."
- Michael Gorban