Steve Kaufman was a former assistant to renowned Pop Artist Andy Warhol, Steve Kaufman, a.k.a. SAK, is considered one of the most important and talked-about Pop artists of our time.
Art was always in focus for Steve Kaufman from early in his life. In 1968 at age 8 Steve Kaufman was sponsored to create paintings that were donated to the Jewish Holocaust Museum of Art in Brooklyn. As a young artist, in 1972 Steve Kaufman worked for Macy's in Manhattan on 34th street painting dog and cat faces on pet rocks.
In 1978 Steve Kaufman enrolled in the School of Visual Arts where he met Andy Warhol, becoming his assistant at the Factory. Warhol was to have a profound influence over the later work of Steve Kaufman.
Steve Kaufman designed theme parties at Studio 54, Mud Club, Underground, & Magique. Calvin Klein and Steve Rubell became early Steve Kaufman collector's. Steve Kaufman met Keith Haring at a School of Visual Arts (SVA) show, and went on to participate in a group show at Club 57 with Haring.
The impact of celebrity on contemporary culture intrigued Steve Kaufman. Famed faces of art, music and film are often the subject of his artwork. Kaufman sought to discover society's common denominators in his artwork - the elements and individuals who generate an immediate response from the viewer. Steve Kaufman was an artistic journalist commenting on history, both past and present. His dynamic style often combined images of the world's icons with visual tapestries woven out of landmarks or other related references to their celebrity.
Steve Kaufman always reflected his concern for the world around him in his work, benefiting such causes as AIDS, gang violence and homelessness. Instead of hiring actors or other illuminati as Warhol did, Steve Kaufman hired gang members from the streets of LA to work in his studio as assistants. 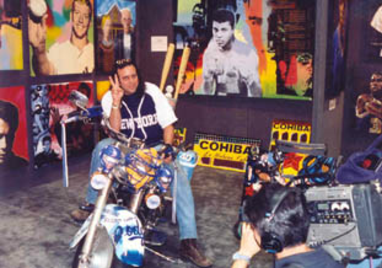