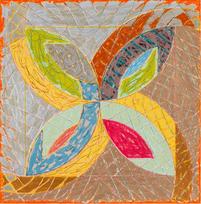 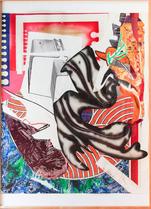 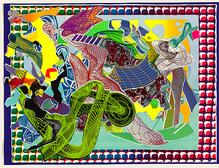 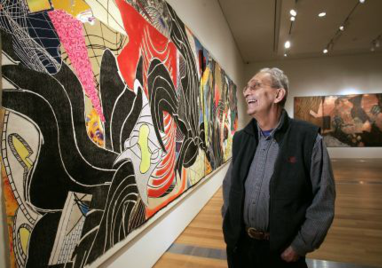 Born in Malden, Massachusetts, Frank Stella attended Phillips Academy, Andover, Massachusetts (1950–54), where he began his study of painting. Frank Stella subsequently attended Princeton University (1954–58), where he continued painting, and majored in history. Frank Stella moved to New York City in 1958, where he continues to live and work today.
Frank Stella, one of the world's leading working artists, created his thirteen Wave prints between 1985–89. Each is named for a different chapter of Herman Melville's masterpiece "Moby-Dick". Frank Stella's abstract style gives each of these works a tantalizing, suggestive relation to the chapter for which it is named. Frank Stella's Waves series was originally released in groups of six (1988) and seven (1989). Frank Stella's Waves are multi-media prints, combining such diverse media as silkscreen, lithography, linoleum block, hand-coloring, marbling, and collage. Frank Stella's Waves are abstract in style, vivid in color, and imposing in size.
Throughout his career, Frank Stella has continued to challenge the boundaries of painting and accepted notions of style. As early as 1959, critics dubbed Frank Stella the “enfant terrible” (or "bad boy”) of the contemporary art scene. Frank Stella's art—simple, cool, pure—contrasted dramatically with the Abstract Expressionist style that had dominated mid-century American art. Frank Stella's Black Paintings, in their severe simplicity and use of a single somber color, opened new paths for abstraction and exerted a profound influence on the art of the 1960s. Though Frank Stella's early work influenced and allied him with the emerging minimalist approach, Frank Stella did not regard himself as an adherent of minimalism, and in fact, his art has become more complex and dynamic over the years.
Having moved from a restrained minimalist aesthetic, Frank Stella’s compositions are exuberant both in color and form, joining together painting and sculpture, a form in which Frank Stella has become increasingly interested. Frank Stella has been awarded many honors, including the Charles Eliot Norton Professorship of Poetry at Harvard University. "Working Space," Frank Stella's provocative lecture series (later published), addresses the issue of pictorial space in postmodern art. 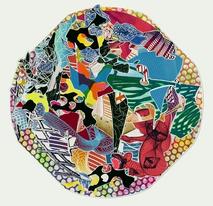