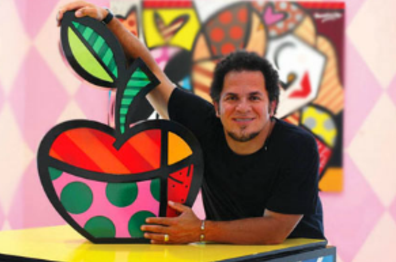 Romero Britto is a Brazilian artist who became one of the most recognizable and celebrated artists after he brilliantly incorporated the Absolut logo into one of his paintings. "The Prince of Pop", Romero Britto's style combines pop art, cubism and graffiti art.  Romero Britto's technique of using bold colors and thick black lines makes his work easily recognizable.
Romero Britto was born in Recife, Brazil in 1963. Self-taught at an early age, Romero Britto painted on surfaces such as newspapers. In 1983, Romero Britto traveled to Paris where he was introduced to the work of Matisse and Picasso. Romero Britto combined influences from cubism with pop, to create a vibrant, iconic style that The New York Times describes, "exudes warmth, optimism and love."
In 1988, Romero Britto moved to Miami and emerged as an international artist. In the following year, he was selected alongside Andy Warhol and Keith Haring for Absolut Vodka's "Absolut Art" campaign. Britto's pop sensibility has since leant itself to many collaborations with such brands as Audi, Bentley, Disney, Technomarine, Evian, and FIFA. Romero Britto has also illustrated several books published by Simon & Schuster and Rizzoli. The work of Romero Britto has been exhibited in galleries and museums in over 100 countries, including the Salon Nationale des Beaux-Arts exhibition at the Carrousel du Louvre in 2008 and 2010. Romero Britto has also created public art installations for the O2 Dome (Berlin), Hyde Park (London), John F. Kennedy Airport (New York), and Cirque du Soleil at Super Bowl XLI.
Romero Britto considers the role of an artist to be an agent of positive change. Romero Britto serves as a benefactor, donating time, art and resources to over 250 charitable organizations and several boards such as Best Buddies International, and St. Jude's Children's Research Hospital. He was recently named a founding inaugural benefactor of Harvard's "International Negotiation Program," by Dr. Daniel Shapiro, in his quest for peaceful conflict resolution. Romero Britto has also spoken at the World Economic Forum in Davos, and at countless schools and institutions. In early 2011 the President of Brazil, Dilma Rousseff, invited Romero Britto to create the logo for Rede Cegonha, a project to reach over 61 million pre and post-natal mothers and babies. Romero Britto was selected to serve as the Ambassador to the 2014 FIFA World Cup in Brazil.