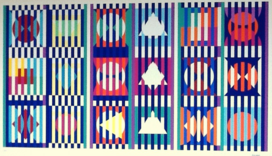 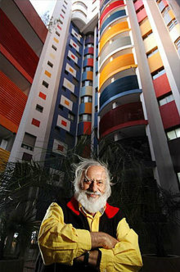 Yaacov Agam is an Israeli born artist of profound versatility and inventiveness. Internationally recognized as a master of kinetic and optical art, Yaacov Agam is one of the world's foremost artists.  His ability to create multiple illusions is what makes Yaacov Agam Israel's most renowned artist today.
Yaacov Agam held his first solo exhibition at the Galerie Graven in 1953. Yaacov Agam established himself as one of the leading pioneers of kinetic art at the Le Mouvement exhibition at the Galerie Denise René in 1955, alongside such artists as Alexander Calder.
In 1964, Yaacov Agam wrote his artistic credo, unchanged since then.
“My intention was to create a work of art which would transcend the visible, which cannot be perceived except in stages, with the understanding that it is a partial revelation and not the perpetuation of the existing. My aim is to show what can be seen within the limits of possibility which exists in the midst of coming into being.”
The work of Yaacov Agam is usually abstract, kinetic art, with movement, viewer participation and frequent use of light and sound. His works are placed in many public places. His best known pieces include "Double Metamorphosis III", "Visual Music Orchestration" and fountains at the La Defense district in Paris and the "Fireand Water Fountain" in the Dizengoff Square in Tel Aviv. Yaacov Agam is also known his Agamographs, which use lenticular serigraphy to present radically different images, depending on the angle from which it is viewed. The lenticular technique was executed in large scale in the 30' x 30' (9.14 M x 9.14 M) "Complex Vision" which adorns the facade of the Callahan Eye Foundation Hospital in Birmingham, Alabama.
Yaacov Agam created the Hanukkah Menorah at the corner of Fifth Avenue and 59th Street in New York City, sponsored by the Lubavitch Youth Organization. The 32-foot-high, gold colored, 4,000 pound steel structure is recognized by the Guinness Book of World Records as the World's Largest Hanukkah Menorah. It uses real oil lamps, which are lighted every year during Hanukkah, with the aid of cherry-picking machines.
Yaacov Agam is the highest-selling Israeli artist. In a Sotheby's New York auction in November 2009, when his “4 Themes Contrepoint” was sold for $326,500, Yaacov Agam said: “This does not amaze me ... My prices will go up, in keeping with the history I made in the art world.” A year later, his “Growth”, a kinetic painting done in oil on a wood panel, which was shown at the 1980 retrospective at the Guggenheim Museum, estimated at $150,000 to $250,000, sold for the record-breaking sum of $698,000. 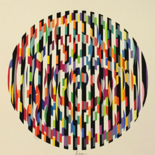