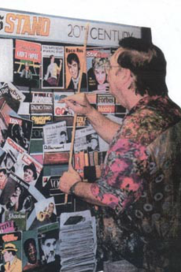 Ken Keeley is internationally known for his tight, yet unpretentious, renditions of famous and obscure New York City scenes.  Ken Keeley has picked out the most significant people and events of the last 100 years and using his photo-realist style creates art that remembers. Ken Keeley is the preeminent photo-realist of our time.
Ken Keeley has mastered the intimate visual rendition of a large universal scene, in intimate detail and sustained with a certain emotion. Not quite a nostalgia, but an acknowledgement of how things were & how they are. Ken Keeley has a genuine work ethic. He has no studio assistants, just one man chipping away at the big picture, one element at a time, same as he did when he started out some forty years ago.
These days Ken Keeley is finding that his colors are shifting, getting deeper, bolder with richer textures. "Just a natural transition", Ken Keeley says. "There is more of a build up of paint." Ken Keeley creates, literally, in the midst of a nature preserve, to the music of the many birds who visit his hideaway. He does all things well with a paint brush, meticulous, with care, with respect for the work, the tradition and the viewer. A humble man who went from a purchasing agent in the armed forces when Eisenhower was president to an artist who commands substantial amounts for his paintings.
Many people get their impressions of New York City from a Ken Keeley rendition. The works of Ken Keeley are held in public collections such as the Philadelphia Museum of Fine Art, Malcolm Forbes Public Museum, Reading Museum of Fine Art and Stoney Brook University, Long Island, New York.