James Albert Rosenquist was born in Grand Forks, North Dakota, in the heart of the Great Plains. The vast distances, with their deep perspectives and the long, unbroken horizon made a powerful impression on his visual imagination, and from an early age he drew easily. His parents moved to Minneapolis when he was nine, and he continued to draw, although he had little formal exposure to fine art in his early years.
In 1955, he won a scholarship to study at the Art Students League in New York City, and made his way to Manhattan, the center of an international art scene dominated by the school of abstract impressionism, led by a heroic generation of insurgent creators such as Jackson Pollock and Willem de Kooning.
From 1957 to 1960, he earned his living as a billboard painter. This was perfect training, as it turned out, for an artist about to explode onto the pop art scene. Rosenquist deftly applied sign-painting techniques to the large-scale paintings he began creating in 1960. Like other pop artists, Rosenquist adapted the visual language of advertising and pop culture to the context of fine art. Rosenquist achieved international acclaim in 1965 with the room-scale painting F-111.
His specialty is taking fragmented images and combining, overlapping, and putting them together to create visual stories. This can leave some viewers breathless yet others confused, making them consider even the most familiar objects in more abstract and provocative ways. 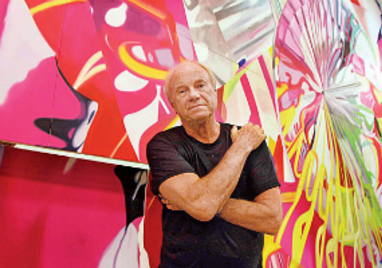